Movement and Threats Have Changed!

In the midst of my game Icarus having its premiere at Gen Con this past weekend, I managed to squeeze in a fairly long game of Emberwild late into the night on Saturday, and got some really great design feedback out of it. This feedback has impacted two big parts of the game- MOVEMENT and THREATS.

When I set out to make this game, it was with the intention of making something that smashed together the structure and narrative scaffolding of games that are Powered by the Apocalypse (Dungeon World, Masks, Apocalypse World, etc) with the ability to utilize meaningful tactile elements like miniatures and maps at the table, which are my favorite part of playing games like Dungeons and Dragons. And while you certainly can use minis in a game like Dungeon World, it's not integrated into the system in a way that makes their use have any mechanical value.

I also wanted to address one of my least favorite parts of games like D&D: combat. After playing narrative systems like Dungeon World or Masks, combat in D&D feels like it takes forever (and a half) to get anything done. And through the playtest at Gen Con, I found that, despite the more streamlined PbtA moves structure, this game hadn't addressed that problem enough for me. So these recent changes do their best to tackle exactly that. If you're interested in how, I'll talk more about it below. Otherwise, just go grab the new files and give them a read!

So the first few drafts of Emberwild, despite being very PbtA in their move and character creation structure, used movement on the maps in a very D&D way. You had a speed score that allowed you to move a certain number of squares across the map. Pretty straightforward. BUT I found the game was slowing down in two ways. The first was that "moving while under threat" required you to roll dice. This made sense to me narratively (every time you move somewhere in the midst of enemies, there's a chance for something to go wrong), but in practice, it slowed everything WAY down. You want to move forward to attack? You've gotta roll first. You get a mixed success? Somebody hits you before you even have the chance to strike. It felt brutal and, frankly, not in line with the cinematic nature I wanted to bring to the game. It made everything drag and drag and drag. After playing around in this playtest with lots of ideas, I finally landed on the new style of movement you'll see in the latest draft: Zones.

When someone triggers "Lay of the Land", part of the GM's responsibility is to draw the battle map and divide it up into zones. In a tavern, these might be things like Dining Area, Bar, Staircase, Entrance Hall, Hearth, Kitchen, etc. Also, when moving, you can now go from one zone to another for free using the "Get Into Position" move. If you want to traverse more than one zone, you'll have to use this same move and roll + Swift to see if you make it without consequence. This introduces stakes if you're running through a battle field, but also allows you to get to another area without having to stop everything to roll. It also reduces the time it takes to figure out where you can go (one of the major things that slowed down our playtest) because you aren't counting squares- you're just looking at zones.

As a result of this change, a lot of the weapons and moves have been modified to match. You'll see ranges have changed, moves now refer to zones instead of squares, etc. It was a fairly large overhaul on all accounts, but after experimenting with it, I think it will get me closer to the type of feeling I want the game to have when its run.

Another big change that happened involved threats. Not only was the Threats section heavily impacted by the movement change detailed above, after running some big encounters I also got rid of hit points and introduced something I'm calling the Harm Pyramid.  Each threat will have a harm pyramid that you’ll use to track its health during the game. Whenever any track on the harm pyramid is completely full, the threat is ended. I'll explain using the example below: 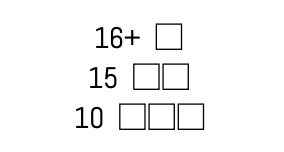 On this threat pyramid, every time the threat takes 10 or less damage from an attack, the bottom layer of the pyramid is marked. Every time it takes 15 or less damage, the middle layer and every layer below it is marked. If it takes 16 harm or more harm, the threat is immediately eliminated because the only box on that line was marked.

Obviously these damage numbers,  the number of boxes on each level, and the number of levels can all be modified to make threats easier or harder to defeat, but I think it will be a much more visual way of doing harm, and should hopefully be less intimidating and easier to balance than the more traditional hit point system.

There are a few more minor tweaks that were made, and who knows how long it will be until another major overhaul is done to one of the pieces of the system, but for now I'm excited to implement these changes into my upcoming playtests.

I'm excited to start doing some Kindling for the game. These will provide some starting questions and scenarios to get things rolling and allow an interactive introduction to the world for the GM and players. Obviously the bestiary is still looming on the horizon, but that's probably going to get tackled after at least a few pieces of Kindling have been written. I'm also going to introduce a VERY simple crafting system to allow you to collect things from your environment in order to make pieces of equipment you want, instead of just having to wait for them to be rolled up randomly.

Let me know your thoughts on the new movement and threat mechanics, and if you have any ideas for starting scenarios you'd like to see me play with! Snag the new files below, and as always, thanks for supporting Emberwild.

A Game of Electric Fantasy